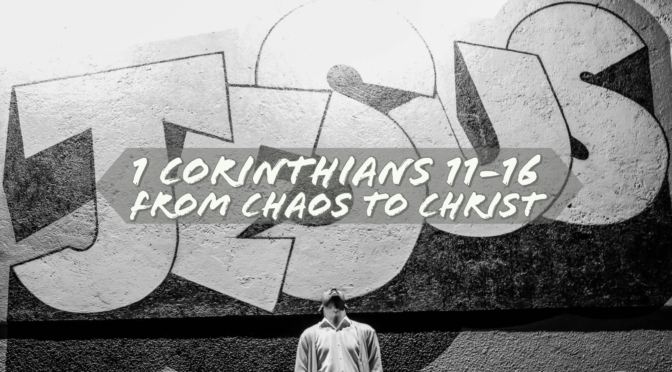 Order in the house of God

What would be worse: someone bringing their own sense of order to your house or someone packing up your house in their own way? Why?

Share an experience of being in a noisy, busy place. What did you love about it; what frustrated you?

1 Corinthians 14 continues the discussion Paul began at 1 Corinthians 12:1 about spiritual gifts (or spiritual things). Building on the reality that everyone in the church has been given gifts from God (12:7, 27) and the importance of each other and the inter-relatedness of each other (12:14, 20, 25), Paul turned his mind to the antidote to much of the Corinthian dramas in chapter 13 – love. The first part of chapter 14 then dealt with (what looks like) a specific problem in Corinth – they have become enamoured with tongues speaking which is of detriment to the church because it does not build them up (14:12). Having unpacked the theology and usefulness of tongues and prophecy, from 14:26 Paul turns his mind to exactly how they ought to be used in the body of Christ so that everything is done in accordance with the character (14:33) and will of God (14:40).

Follow this link to read the passage on BibleGateway…

What did you see? (Observation)

Practical Outworkings for the Church (v.26-33)

“What then shall we say…” (v.26) – Paul starts a new section dealing with the practicalities of tongues and prophecy. It looks like the Corinthians all come with a desire to exercise their different speaking gifts (hymn, word, revelation, tongue) and now Paul practically applies both the way of love and the need to build up the church (14:12) to their convoluted and chaotic gathering.

“…someone must interpret.” (v.27) – this is the outworking of 14:23. If there is no interpreter (v.28) then there ought not be any tongues because the church cannot be built up and unbelievers cannot be built in. This is a clear word of Scripture but there are churches where tongues speaking happens without interpretation in a chaotic fashion (ie. everyone prays in tongues simultaneously). Such practices would appear to be in clear contravention of the Scriptures. Speaking in tongues is never noted as a mark of true salvation or a special presence of the Spirit and should always be interpreted.

That said, note that tongues speaking is interpreted but not weighed. You may want to ponder this and what you would do if someone spoke in tongues in church and said something contrary to the scriptures. Does the lack of necessity to weigh tongues interpretations mean they ought never be weighed?

“Two or three prophets…” (v.29) – again, two or three. You can see the orderliness of speaking in church without the theological justification being yet stated. Your group should have discussed the meaning of prophecy last week. To be completely practical, what a good service leader does is prophecy; same with a good song leader, a person giving a testimony or sharing a story of a conversion or something that happened for them as a Christian. So in the public gathering that we call church, when someone speaks a word of encouragement, male or female, they are prophesying. Not everyone can or should but many ought to.

“…the others should weigh carefully what is said.” (v.29) – the goal of prophecy is that people may be instructed and encouraged and if people are being instructed or encouraged in such a way that is contrary to God’s word then that must be countered in the church. The responsibility for this lays with other prophets but not all the prophets (v.34-36). The orderliness of the process is emphasised in v.30-32.

It is interesting to ponder how we might utilise prophecy more often in church. As far as can be seen, we don’t have prophets getting up to speak and we don’t weigh the words of those who do… or do we?

I know of one church where at the end of each sermon series they have prophesy week and people are encouraged to come with a story from their life, a point of application or something they have learnt and been changed by from the series and they all share and are encouraged and pray. I don’t know about you but in some of our congregations that may be worth considering.

It is also worth noting that ministry staff do listen to what is said from the front; the people who speak are chosen for their wisdom and clarity and when they say something awry, it is often subtly corrected later in the church and brought to the speakers attention afterwards. Should this be more formal in our church?

It is also worth noting that in an environment where the Word of God was not so readily available, prophecy was more necessary.  There was not a “bible” when Paul was writing 1 Corinthians and encouraging applications from the stories (written and passed on) of the life of Christ may well have been much of the content of prophecy. Would we expect or do we need so much prophecy today given that we have the Word of God in Scripture?

These are all good questions it is worth getting your group to chew over.

“For God is not a God of disorder but of peace…” (v.33) – Don Carson writes on this verse: This truth does not of course sanction mere traditionalism in worship or sanctify stuffiness;  but it does warn us sharply about the dangers of the opposite end of the spectrum. Wise worship does not pursue freedom at the expense of order or spontaneity at the expense of reverence. This reality flows into v.34.

If you are looking for a controversial part of the Bible, you have found it! However, the heat and confusion is all taken out of this verse if we remember our basic skills of reading in context and being thoughtful and careful with the text. Like last week, encourage your group to grapple with the meaning rather than throw this text in the bin, refine it to some archaic mistake or simply ignore it.

You will be helped in guiding the group on the meaning by going back to 1 Corinthians 11:4-5. You will see there, and elsewhere (Ephesians 5:18b-20), that Paul expresses no reservation about women praying or using prophetic speech in the church. So 14:34 cannot be a blanket ban on women making noise in church. It must mean something else.

Look back into v.29-33 and see that prophecy needs to be weighed – checked, evaluated – as to whether it is true and accords with what God has said. Thus, prophesy in NT is not authoritative in and of itself, it is a word that must be weighed carefully and in an orderly fashion for the Glory of God.

In the context then, two things are true; (1) we have already seen that women are not to remain silent as they pray or prophesy, and (2) in the weighing of prophecy being discussed here (which necessarily involves authority and teaching); it is this weighing/ evaluating’ sifting that women are not to engage in inside the church. Not having a husband does not change the meaning of the situation here. It may mean that a person can ask and discuss a matter later but not in the public setting. The Bible is clear that we should teach and admonish one another.

It is the teaching of the Bible that in the public church setting, the only limitations on the participation of women seem to be in teaching and weighing of prophecy. Prophecy itself, singing, praising, encouragement and praying are all gifts women have and are able to exercise for the benefit of others in the church.

“As in all the congregations of God’s people” (v.33) – this is not just a Corinthian issue but a principle issue that applies across all churches in all places and times based in the order of creation and authority in men and women.

“…as the law says” (v.34) – this sounds like strange reasoning but Paul has already used it in 14:21 by which he meant the OT Scriptures. Paul is probably referring to Genesis 1-2 (2:20-24) for it is that passage that Paul quotes explicitly on two other occasions when discussing female roles in church and marriage. Paul means here that because man was made first and women was made for man, a pattern has been laid down reading the roles the two should play in family and church.

“…speak in the church.” (v.35) – again, there is difficulty here with such an unqualified statement but you should guide your group to again see context and the importance of extracting meaning from context. You might argue that you could include the words “in such a way” in v.35 to fit the context because it is certainly not shameful for a woman to pray or prophesy.

“Or did….” (v.36) – this verse bridges v.34-35 with the conclusion. It is a rebuke of the Corinthians with Paul saying “Did you write the Bible? Are you able to make your own rules?” The answer is of course no! They must sit under the authority of the Word like everyone else, everywhere, for all time.

Practical Warnings and Encouragements for the Church (v.37-40)

“…ignore…ignored..” (v.37-38) – those people who are working in line with the Word and work of God will acknowledge all that has been said as good and true because they will want to sit under God’s authority and not wrestle it for themselves.

What did we learn? (Meaning)

The Body of Christ ought to reflect Christ himself and the nature of the God who is worshipped. Words ought to be used to build people up and speakers should not seek to push their own agenda or their own personhood but to speak God’s words in God’s way to benefit God’s people for God’s glory.  To do church in a worldly way (that appears to be a significant Corinthian issue!!) is contrary to the nature and purpose of church and must be stopped. The enthusiastic language of v.39 (be eager to) ought not be underestimated. Paul wants people to hear the good news of Jesus and respond with delight saying, God is really among you!

Topic A: The Place of Prophecy in Church. You may discuss this when you get to v.29. See the notes above. Do you think our church should open up to more prophecy? What might this look like? How can we maintain order and truth in a chaotic world? What place truth in a world of freedom?

Topic B: The Way we do Church. Our church services are carefully planned with songs and readings; leaders and musicians are trained and given feedback and encouragement. But sometimes, there is laughter and hilarity; sometimes boredom and sombreness. Is there enough order in our gatherings? Could there be more? Is there disorder? Should it be repealed? What would Paul say is missing from our gatherings?