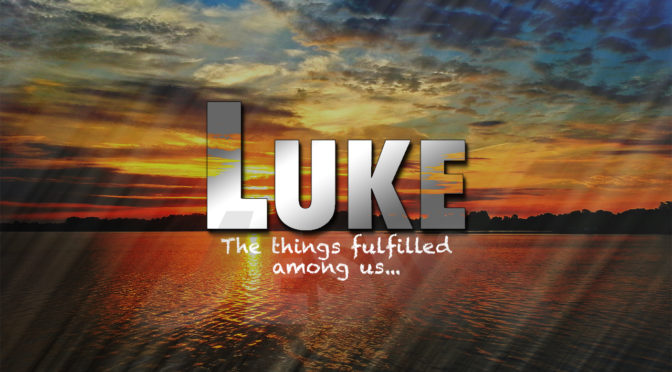 A reed swayed by the wind?

The previous section of Luke described a scene where Jesus raised a widow’s son from the dead. It was reminiscent of the story of Elijah in 1 Kings 17. In both stories, the conclusion was made that a great prophet of God has arrived. It could seem confusing to some whether Jesus is the Messiah or the one like Elijah who was to come. All of the pieces of Luke’s investigation on Jesus is coming to the conclusion that Jesus is Lord and our passage this week describes Jesus assuring both John the Baptist and the crowd around him that the kingdom of God is right under their nose, it just won’t be like you expect.

“John’s disciples told him all these things” Verse 20 establishes that this is John the Baptist and the only John the reader would naturally think about given the great attention to his birth in the first two chapters. We know that John had disciples (followers/students) from passages like this one and also John 1:35-37 where two of his disciples become Jesus’ disciples. Also, Jesus’ disciples refer to them in Luke 11:1 when they want Jesus to teach them to pray. According to Matthew 11:2, John the Baptist is in prison when he calls for his disciples and sends them to Jesus to ask if he is the one.

“Are you the one who is to come, or should we expect someone else?” It’s a good question. We don’t want to follow the wrong Messiah (Brian). It’s hard to get inside John’s head to know what he really wants. There are two schools of thought on this question: the first is that John, who is now locked away in prison, seeks assurance that Jesus is the Christ; the second is that he is subtly pointing his disciples to go and see Jesus and so continuing even in prison to point people to the Messiah. This last view grasps onto the idea that John is somehow faultless in his testimony of Jesus. After all, Jesus declares him as the greatest man ever to have lived in verse 28. I think this view is weak, however. Firstly, he only sends two of his disciples – why not send them all? Secondly, his ministry has been all about preparing people for the coming of Jesus and he himself declared Jesus to be the Lamb of God who takes away the sins of the world! Surely his disciples had grasped that message by now. Thirdly, Jesus statement in verse 23 fits well with assuring John that he ought not to stumble but rather carry on believing that Jesus is the Messiah.

To list references to Christ’s coming from the Old Testament is like finding hay in a haystack. Sure, there are clearer passages to list such as Isaiah 7:14 regarding a virgin birth; Isaiah 62:11 regarding the redeemer coming; Zechariah 2:10 declaring that God will dwell among Israel; Zechariah 9:9 describing the king riding on a donkey. Others, like the one Jesus uses himself from Isaiah 61:1-2, appear more obscure as to who it is referring to. But the way we read the whole bible is to see it as an unfolding narrative of God’s salvation to the ends of the earth. From creation to recreation. Jesus is the Alpha and Omega, the beginning and the end. Having said this, Jesus goes on to highlight a few images from Isaiah in his cryptic answer to John’s question.

“At that very time…” The language sounds as though Jesus crammed all the types of healing into one magic show in the presence of the two disciples of John! But rather, we can be satisfied to know that at the time that this question came to him, Jesus had been doing all that is listed in verse 21. That is, his ministry at that time was characterised as healing many.

“Blessed is anyone who does not stumble on account of me.” The Messiah has come, but he is not what many had expected. This is because the Old Testament mixes the language of the first coming of Christ with the second coming so that he can be described as both the suffering servant (Isaiah 52-53) and the mighty warrior king (Isaiah 60 esp verses 15-19). Our world has witnessed the first coming of Christ which was accompanied with signs and wonders but also his suffering. Note that Isaiah 61 can describe the release from captivity as though it is a national promise while Jesus seems to apply it spiritually. Blessed are those who don’t stumble or give up on him but who remain a disciple. He is the king promised.

“What did you go out into the wilderness to see?” I believe this helps us to see how much of an impact that John had in his ministry that Jesus can simply refer to John without naming him but by asking the crowd to reflect on the time he was in the wilderness.

“…among those born of women there is no one greater than John; yet the one who is least in the kingdom of God is greater than he.” This sounds very wise but what does Jesus mean? In general terms, he places humility and lowliness in this world as a greatness in kingdom terms. We can compare this quote with the beatitude of Luke 6:20-26. More specifically though, Jesus describes John in verses 24-27 as neither double minded (a reed swayed by the wind), nor rich and indulgent, but a man of God speaking the mind of God into this world and pointing others to Jesus. That’s important in the kingdom of God.

29-35 Jesus’ cryptic description of ‘this generation’

“…this generation?” This is unlikely to mean something like ‘gen-Y’ or ‘gen-0AD’ but referring to people of any age. The word ‘generation’ in this context likely refers to an age or epoch. If it is more limited than that then Jesus is describing the people he has observed during his ministry. How, then, does Jesus describe people?

“We played the pipe for you, and you did not dance…did not cry.” It’s a cryptic little riddle. Verses 33-34 is supposed to shed light on it but only makes it more intriguing. The phrase ‘He has a demon’ leads us to see Jesus is mostly describing the Pharisees and the like who rejected John’s ministry and were not baptised. So to say that he is describing all people alive in his day with the term ‘this generation’ is misleading. It seems clearer now that he is referring to people of this age or of this world. So, you’re damned if you do and damned if you don’t seems to be the notion of the riddle. If you minister like John did, neither eating nor drinking wine, you are labelled evil. If you go eating and drinking you are labelled a friend of evil-doers!

Here we begin to see a theme in the whole passage of verses 18-35. How should we judge Jesus’ ministry? It fits perfectly with the prophecies and so do not stumble on account of him but follow him. How shall we judge John’s ministry? He was not a doubting and double-minded man but a humble man of God pointing all and everyone to the kingdom of God. How shall we judge this generation? They are double minded and like children having a tantrum because nothing seems right to them.

“But wisdom is proved right by all her children.” Does Jesus summon the ideas of Proverbs 8 here where wisdom is personified and all who listen to her are her children? “For those who find me (wisdom) find life and receive favour from the LORD. But those who fail to find me harm themselves; all who hate me love death.” Proverbs 8:35-36 (see also 32-33). There seems to be a parallel with verses 35 and 29 where Jesus and John represent wisdom (ultimately Jesus) and the children are those who listened to them and followed. They contrast the children of the marketplace who have double standards and demand that their way is always right. The children of folly are double-minded while the children of wisdom will see the truth and not stumble.

There are those who will see Jesus and declare that he is the One who was promised to come. Others will sway in their decisions and stumble because Jesus is not who they want for a Messiah.

Topic A – Stumbling at Jesus. Are there aspects of who Jesus is or what he has done or promised that stick with you and bother you? Your group may not be able to resolved issues for you here and now but perhaps raising them will give your group something to work on theologically and to pray for in community.

Topic B – Great at humility. Reflect on Jesus’ description of John in verses 24 to 28 and ponder how we can seek to be great in the kingdom of God instead of the kingdom of this age. Consider the following bible verses on humility…

“For the Lord takes pleasure in his people;

he adorns the humble with salvation.” Psalm 149:4

“…if my people who are called by my name humble themselves, and pray and seek my face and turn from their wicked ways, then I will hear from heaven and will forgive their sin and heal their land.” 2 Chronicles 7:14

Prayer for the week

Save us, Lord, from the whims of our own generation and anchor us in wisdom that leads to life. Amen.